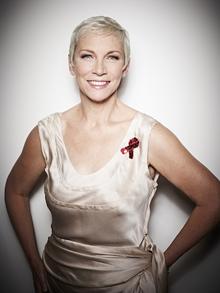 This fall, legendary singer-songwriter, philanthropist and political activist Annie Lennox will headline the second annual Hope Rising! A Benefit Concert for the Stephen Lewis Foundation presented by CIBC alongside Grammy Award-winning recording artist Angelique Kidjo. This epic evening of music and celebration takes place at Roy Thomson Hall in Toronto on Wednesday, November 7 at 8:30 p.m. Again hosted by award-winning host of CBC’s ‘Q’ Jian Ghomeshi, this year’s benefit concert shines a celebratory spotlight on the pivotal role and power of African women as they overcome tremendous adversity and turn the tide of AIDS in Africa.

“As a passionate AIDS activist, I’m delighted to be performing at Hope Rising!. I share the conviction of the Stephen Lewis Foundation that community-based organizations in Africa, and particularly the women who are at the heart of the grassroots response, are playing a critical role in turning the tide of AIDS,” said Lennox. “I look forward to sharing the evening with African grandmothers, Angelique, Stephen, and other friends to shine a celebratory spotlight on the powerful work being done in Africa, and the powerful message of hope it brings all of us!”

Click the title of this story to find out more

The inaugural Hope Rising! benefit concert was held on May 3, 2011 at the Sony Centre for the Performing Arts in Toronto, which featured performances by Alicia Keys, K’naan, Angelique Kidjo, Rufus Wainwright and other renowned artists – who all generously donated their time and talent.  The sold-out evening raised more than $500,000 in support of grassroots African communities working to turn the tide of HIV and AIDS in Africa.

“Hope Rising! is an opportunity to recognize the extraordinary triumph of the human spirit over adversity – alongside illustrious artists who share our passionate support for the cause,” said Ilana Landsberg-Lewis, SLF Executive Director. “This concert is in celebration of women at the heart of the response to AIDS in Africa who work with tenacity to save lives and restore hope in their communities.”

Alongside Lennox’s first Canadian performance since 2007, this year’s concert will also include Stephen Lewis, as he celebrates his 75th birthday on Sunday, November 11. An intimate party will precede the concert, with Lewis’ friends, family and special guests.

“CIBC is very proud to present Hope Rising! for the second year in a row,” said Stephen Forbes, Executive Vice-President of Marketing, Communications & Public Affairs, CIBC. “This is an event that brings world class musicians together to offer hope to people who are living with HIV/AIDS and raise money that is vital to the survival of many families and communities in Africa.”

About The Stephen Lewis Foundation:
The Stephen Lewis Foundation (SLF) works with community-level organizations that are turning the tide of HIV/AIDS in Africa by providing care and support to women, children orphaned by AIDS, grandmothers, and people living with HIV and AIDS. Since 2003, SLF has funded over 700 initiatives, partnering with over 300 community-based organizations in the 15 countries that have been hardest hit by the AIDS pandemic in Africa. For more information, visit www.stephenlewisfoundation.org.