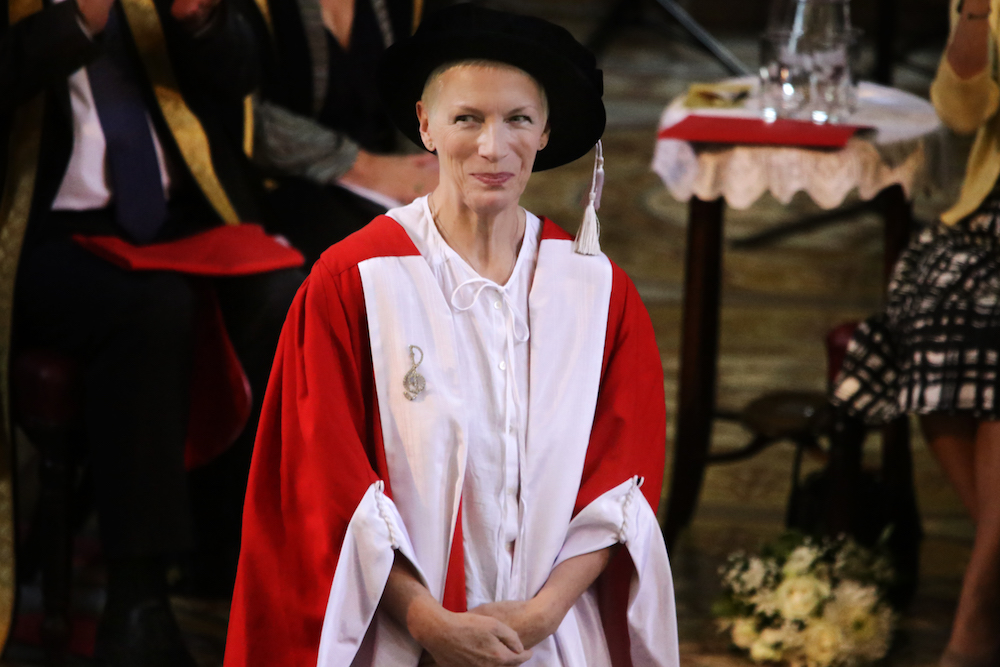 5th July 2017, London – The following speech was delivered by Annie Lennox during the graduation ceremony of the Royal Academy of Music where Annie was today awarded an Honorary Doctorate of the University of London.

Click here to find out more about this event

“To say that I’m honoured and amazed by this exceptional recognition is a genuine understatement.

Thank you so much. I am truly grateful. I’d like to briefly share some memories and reflections with you.

Many of my life experiences can be described as unconventional, idiosyncratic and synchronistic – as this event proves to be no exception.

By rights, I feel I’m not entitled to be here – but as John Lennon once famously said…”Life is what happens to you while you’re making other plans.”

Forty–six years ago in 1971, as a fairly naïve and unworldly 17 year old, my plans brought me to an audition at the Royal Academy to hopefully have a chance to study flute.

A few weeks later, much to my surprise, a letter arrived to inform me that I’d actually been offered a place on the performer’s course.

That letter became the passport to transport me from my provincial home town, in the North East of Scotland, to the overwhelming urban sprawl of London.

Dragging a suitcase and holding a scrap of paper, with directions to guide me from King’s Cross Station to Camberwell, I eventually arrived at the Ethel Kennedy Jacobs Hall of Residence, where I was to reside for a few terms, until I was able to ‘up my game’ by moving into a shared room in a ground floor flat in West Hampstead.

After a while I decided to become a lodger in the attic bedroom of a house in East Finchley – and after that, I managed to find a basement room in Powis Gardens in Notting Hill – when the area was far more wild than gentrified. Following that chapter – I rented a room in a shabby flat overlooking Shepherd’s Bush roundabout – followed by another shared room in Fulham. Then I moved into a room in a suburban house in Putney, followed by a tiny single bedsit in a house in Camden Town, which subsequently led me to a squat above a record store in Crouch End…

Over the course of those peripatetic ‘Withnail and I’ type years, my existence passed through a series of cheap rooms, bed sits and flats ranging across several London’s boroughs, while I supported myself with a variety of part time jobs.. waitressing in restaurants, serving drinks behind bars, selling books in Shaftesbury Avenue and baby clothes in Holloway Road – giving flute lessons, baby sitting, buying and selling second hand clothes – and I did once work in a fish factory.

Over the period of time while I was a student, I came to realise that I would never be a good enough flautist to play in an orchestra or chamber ensemble.

My dreams had failed and I needed to pursue a different path. The thought was both liberating and terrifying, as I had to face the fact that I had absolutely no idea what my future would hold.

I faded away from the Academy…

In musical terms, you could call it a gradual diminuendo.

The truth is.. I stand before you as an acronym, a ‘drop out’ holding an honorary doctorate.

And the reason I’m sharing this with you, is to illustrate just how unpredictable the future can be, with it’s plethora of circumstances, opportunities and choices.

You truly are the director and co creator of your own destiny as it plays out before you.

As today’s graduates of 2017, each one of you has reached or surpassed the level of talent, excellence and artistry that’s required of all professional musicians.

I am genuinely in awe of your accomplishments.  And I really do know what it takes –

The disciplined effort and hard work..The countless hours and years of dedicated practice….The honing of your outstanding musical gifts and skills.

Some of you may already have a clear path ahead and some of you might be wondering which direction to take next.

But no matter what – always be mindful that a deep love for music and music making lies at the core of your being.

It is the reason that brought you to this particular moment, and it will always be available to you through every stage of your life, to inspire, to soothe, to heal, to celebrate, to connect and humanise us.

Music has the power to do these things.

All you have to do is bring it forth.

I wish each and every one of you all the success and joy the world has to offer.