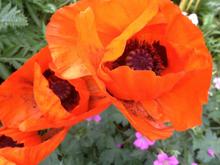 Here’s a couple of poppies displaying their crimson glory in a London garden yesterday. (Pause) Quick cut to … Music. One of the things I love about music is that everyone can appreciate whatever they like. Just because I like something doesn’t mean that everyone else has to agree, and visa versa. As a performing / recording artist, you quickly come to discover that people either love you…hate you… or are more or less indifferent. If you say you love The Rolling Stones, it doesn’t mean you can’t love The Beatles as well. That sort of notion is absurd,but it’s actually the kind of ludicrous thing people have argued about for years. I think that must have something to do with people’s deep seated need for identity and territory or something. I’d forgotten that people’s musical views and tastes can be so polarising. What I was basically saying in my last blog was that there’s an exceptional documentary about The Rolling Stones that takes you right back to the 60’s, and you can see just how much things have changed comparatively since those days.. and Mick Jagger’s performances were on an exceptional level.. So.. Hey! …Yooo! …Gedaffa ma Clawd!