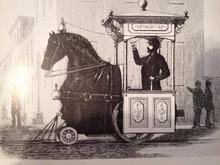 Here’s an extraordinary late 19th century invention – "The disguised tram that would not frighten horses," created by a Boston engineer called Mr Matheson. Matheson was convinced that the horses on the streets of Boston must be terrified by the noisy new steam train engines, and suggested that the trams should be disguised to look like horses in order to solve the problem. Although the tram ran for a short time, none of the Boston officials took it seriously, resulting in the aforementioned inventor becoming so disillusioned that he spent the rest of his life protesting against the evils of mechanisation. Somewhat tragically, he eventually died in the poorhouse….