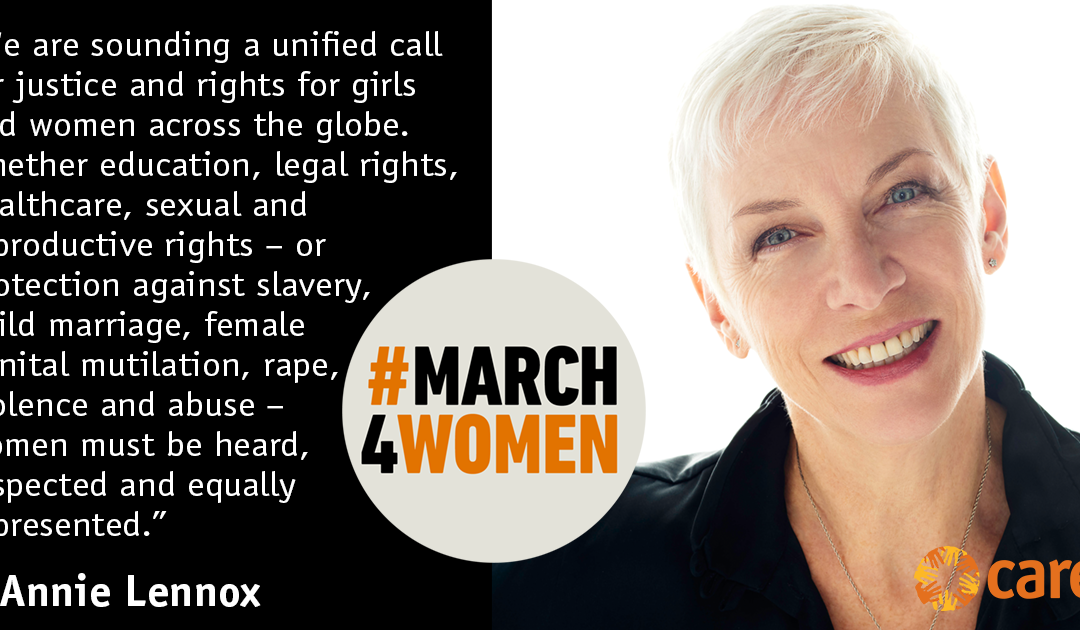 Helen Pankhurst, great-granddaughter of suffragette leader Emmeline Pankhurst, London Mayor Sadiq Khan, Annie Lennox and Bianca Jagger will lead a rally and march beginning at 12pm on Sunday 5 March, ahead of International Women’s Day. They will be joined by crowds of supporters raising their voice in solidarity with women and girls worldwide who endure inequality and injustice.

The rally’s grand finale will be a mass ‘singalong’ of the classic women’s empowerment song ‘RESPECT.’ Led by Olympic ceremony composer David Arnold and vocal coaches Carrie and David Grant, the crowd will ‘CAREoke’ along with a range of famous singers including Melanie C, VV Brown, Kate Nash, Laura Mvula,Tanita Tikaram, Natasha Bedingfield and Preeya Kalidas. There will also be music by Laura Mvula, Billy Bragg and Beth Orton. After the rally, crowds will march across iconic Tower Bridge.

Annie Lennox, who will make a headline speech at the event, said “We are sounding a unified call for justice and rights for girls and women in every corner of the globe, whether in terms of education, legal rights, health care, sexual and reproductive rights – or protection against slavery, child marriage, female genital mutilation, rape, violence and abuse. Women must be heard, respected and equally represented.”

Event organisers CARE International are also emphasising the importance of the inclusion of men and boys in tackling sexism and discrimination. The Mayor of London, Sadiq Khan, who will address crowds at the event said: “It’s unacceptable that in 2017 in London, the most progressive city in the world, your gender can still determine how much you get paid and your career prospects. Even worse, women and girls around the world are still more likely than men to suffer from violence or discrimination. As Mayor, I have vowed to be a proud feminist at City Hall, and I will do all I can to remove any barriers to women.

“Equal rights is not just a fight for women – all of us need to stand in solidarity with our mothers, sisters, daughters and friends to say that discrimination, in all shapes and forms, will not be tolerated. That’s why, ahead of International Women’s Day, I am honoured to stand shoulder to shoulder with Londoners from all backgrounds to spread the message that London is open and a place where we celebrate everyone, from every walk of life, regardless of their gender.”

#March4Women will shine a spotlight on the inequality women and girls face around the world. CARE’s work in over 75 countries shows that they are still far more likely to experience violence, discrimination, harassment and modern slavery. It will also highlight the plight of women and girls caught up in the global refugee crisis and will challenge the government to step up its commitments to refugees.

Supporters are invited to join in singing for a fairer world and raising their voice for the cause of equality. We will spend an unforgettable afternoon hearing from a star line up of outspoken feminists, refugee women, celebrities and global activists.”

Helen Pankhurst said: “Our solidarity and the fight for the equal rights of women should not end at the shores of our own country. Join us ahead of International Women’s Day, in solidarity with the many refugees who have trekked hundreds of miles to find safety, many of them mothers, forced to carry their children from one danger zone to the next.”

The lively programme on the day will also include a warm-up ‘morning rave’ from 11am -12pm by London-based company Morning Gloryville founded by a Zimbabwean woman who experienced being stateless herself, making a family friendly occasion for all.