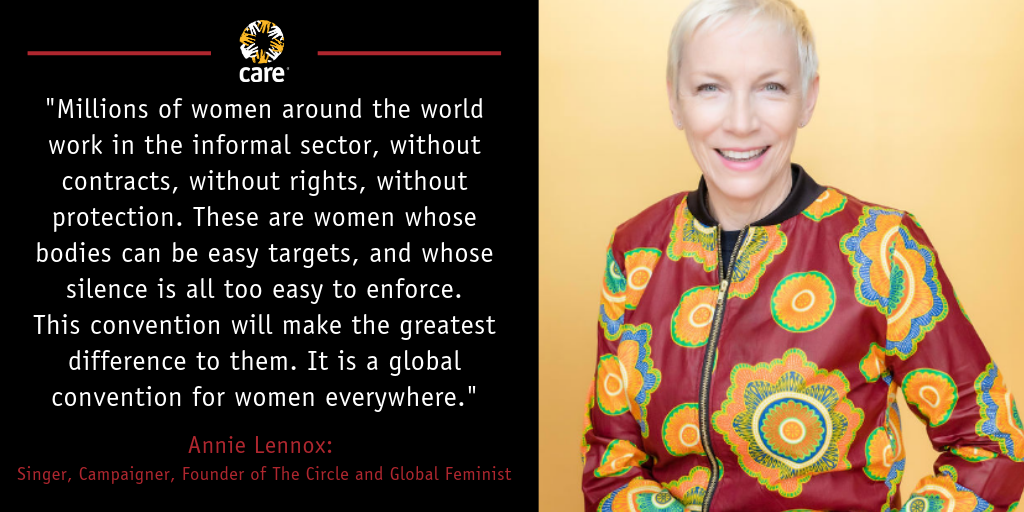 “Violence and harassment in the workplace is a global issue that requires a global response. Over a third of countries globally have no existing laws in place to prohibit sexual harassment at work – representing a huge historical blind spot” says Glen Tarman, Head of Global Advocacy at CARE International.

“This convention means that we now have an international legal standard to specifically protect women at work from harassment and abuse. While this is a great starting point, the next step will be to put this standard into action for women everywhere.”

The agreement made today follows intense negotiations in Geneva at the 2019 International Labour Conference, the annual gathering of the ILO’s 187 member States. The landmark ILO Convention is the first-ever global treaty on violence and harassment in the workplace and follows years of campaigning by trade unions, civil society and women’s organisations, including CARE.

Over the last two years, CARE’s global #March4Women campaign saw over 200,000 people around the world sign petitions to call on their governments and business to join workers’ organisations and adopt international standards on this issue.

CARE events, rallies and marches took place across almost 50 countries, as thousands of men and women joined CARE, our partners and our ambassadors to stand up for gender justice in the world of work.

“The scope of the agreed ILO Convention reflects the needs of the hundreds of thousands of women CARE supports every day; largely the most marginalized and least visible global citizens,” says Caroline Kende-Robb, CARE International’s Secretary General.

“In Cambodia alone for example, nearly 1 in 3 female garment factory workers reported experiencing sexually harassing behaviours in the workplace over the last 12 months – we want to bring that number down to zero, everywhere.”

Kende-Robb continues: “While this is a momentous step forward, we now need governments to ratify and domesticate the ILO Convention at the earliest opportunity so that these women see real change in their workplaces, which should be places of safety, not abuse”.