Yesterday I spoke at Google’s Zeitgeist. 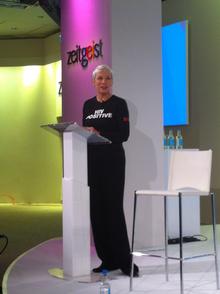 Yesterday I spoke at Google’s Zeitgeist. For those of you who haven’t heard of it before, Zeitgeist literally means "the spirit of the times"….and for me, the opportunity to present the issue of HIV /AIDS as it continues to affect the lives of millions of women and children in Sub Saharan Africa, was a special opportunity to raise awareness to a room full of people who have tremendous connective power and influence, and hopefully galvanise their interest and potential future contribution as agents for social change.
When I asked the room to put their hands up if they already knew that one out of three pregnant women were HIV positive in South Africa..only three hands went up in a room of four hundred people.
Which only goes to prove how necessary it is to keep raising awareness about this human catastrophe.
As a UNAIDS Goodwill Ambassador, the call out message is that we are aiming towards the end of pediatric AIDS by 2015.
A tall order, BUT with political commitment and partnering with civil society etc..it truly is feasible.
Bernard Kouchner, the co founder of Medecins Sans Frontiers stated directly that it "CAN BE DONE".
As the United Nation’s recently launched campaign states..BELIEVE IT…DO IT.