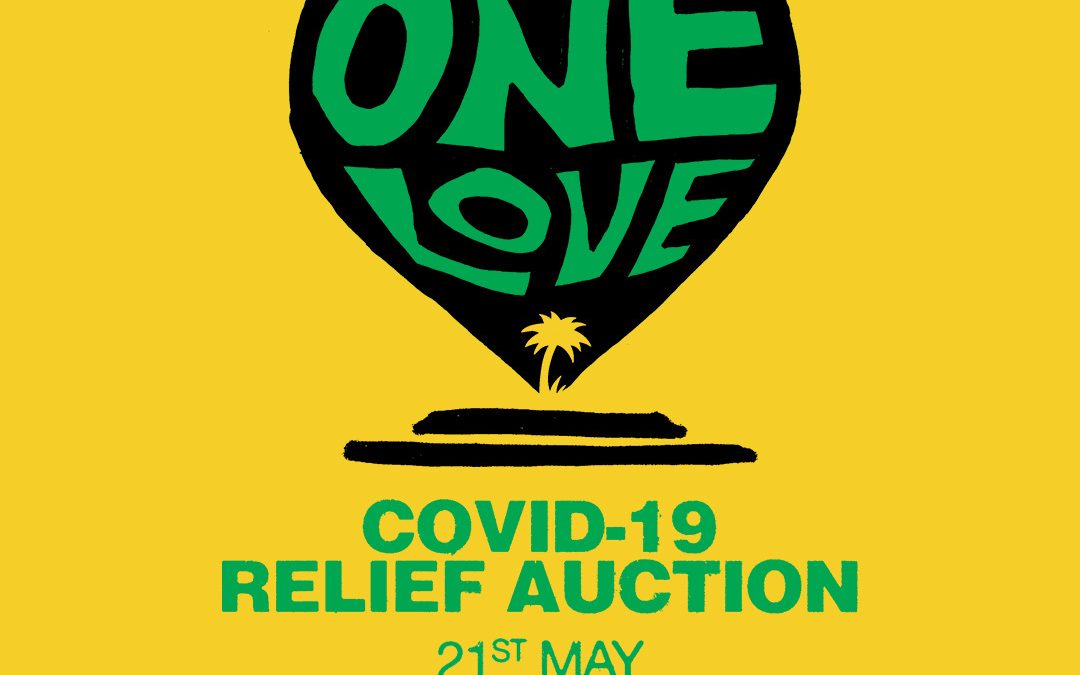 Island Records is proud to announce the One Love Covid-19 Relief Auction in support of NHS Charities Together & Feeding America. Artists old and new, as well as friends of the label, have donated one-of-a-kind lots to raise funds for relief efforts. The event will be hosted by Emmy®, Tony® and Grammy® Award-winning actor, singer, director, composer and playwright Billy Porter and will be broadcast live from 6pm on May 21st.

To bid on the lots, you must register in advance with Island’s partner Omega Auctions, further information can be found via Island Records’ dedicated oneloveauction.com
Website. All lots are available to view and place bids on via an online catalogue https://bid.omegaauctions.co.uk/m/view-auctions/info/id/83 which can be found on Omega’s website www.omegaauctions.co.uk. Featured lots include:

Mumford & Sons: A signed ‘Gentlemen Of The Road Goodtime’ Banjo made by Deering Banjos & virtual one on one lesson with Winston Marshall.

U2: 30th Anniversary Joshua Tree Deluxe box set signed by the band and lyrics to ‘Where The Streets Have No Name’ by Bono.

Osea Island: A two-night stay for four people on the private Island

Abbey Road: A private VIP tour for 4 at the legendary Abbey Road Studios followed by breakfast.

Abbey Road: A private VIP tour for 4 at the legendary Abbey Road Studios followed by breakfast

Amy Winehouse: Pair of Amy’s stilettos worn by the artist

Ashton Attzs: Rising artist will paint a portrait for the winner

Ben Howard: The guitar Ben wrote “Keep Your Head Up” on and played onstage at Glastonbury

Donae’O: The t-shirt he wore in his classic video for ‘Party Hard’

Ella Eyre: Outfit worn by Ella in ‘Mama’ Video, made by Rife & Stride

Hozier: Signed jacket from “Someone New” video and signed lyrics

Mary Wilson of The Supremes: 2 VIP tickets, plus meet and greet to her show in Las Vegas

One Republic: Signed bass guitar from ‘Love Runs Out’ video

Portishead: Once in a lifetime Portishead Dummy-era care package

Sean Paul: Get styled by Sean Paul – a jacket and pair of shoes from his own wardrobe

The Specials: The Specials Day certificate from the Mayor of Los Angeles & Signed art prints by Terry & Horace

Tricky: Tricky Photograph by Nadav Kander signed by both artists.

U2: Signed The Joshua Tree vinyl boxset & lyrics for ‘Where The Streets Have No Name’ by Bono.

About NHS Charities Together

NHS Charities Together is a membership organization representing, supporting and championing NHS Charities. There are more than 230 NHS charities across the UK and most of them focus on helping our hospitals do more. Collectively these charities give £1 million every day to the NHS so that people can stay well for longer and get better faster. These vital funds and services are above and beyond what the NHS alone can provide, touching lives and making a huge difference to millions of people when they are at their most vulnerable.

Porter is an Emmy®, Tony® and Grammy® Award-winning actor, singer, director, composer and playwright with ground-breaking performances as Pray Tell in Pose on FX, for which he recently received and Emmy Award, as well as Golden Globe and Critics Choice nominations, as well as Lola in Kinky Boots on Broadway for which he won a Tony Award for Lead Actor in a Musical. Porter has also recorded several albums and acted in many Broadway and Off-Broadway productions, including Miss Saigon, Grease, Angels in America, and The Merchant of Venice. Additional television and film credits include “American Horror Story: Apocalypse,” “The Get Down,” “The Humbling” and “The Broken Hearts Club,” among others. Porter can be seen in the highly anticipated “Cinderella” re-make next year.

Omega Auctions have established themselves as one of the leading auction houses worldwide for music memorabilia and vinyl records over the past decade.  Previous highlights from collections have included the first recording of David Bowie, original jackets from the Beatles film Help!, George Harrison’s car and items from Elvis Presley and John Lennon.

Proceeds received from the sale will be shared equally between NHS Charities Together and Feeding America. Proceeds means 100% of the hammer price raised.