What lies ahead folks 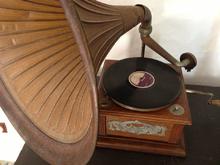 While we’re all chasing the latest technological inventions hell for leather, I’m still fascinated by things of the past. Take for example this wonderful gramophone, or phonograph player.
What an extraordinary invention it truly was! The word "gramophone" (taken from the greek words "gramma"- meaning "letter," and "phone" – meaning "voice" ) was invented by Thomas Edison in 1877 for the recording and reproduction of sound recordings, consisting of waveforms which were engraved onto a rotating disc. As the disc rotates, a stylus, or needle traces the waveforms and vibrates to reproduce the sound waves.
Alexander Graham Bell’s Volta Laboratory made several improvements in the 1880s, including the use of wax-coated cardboard cylinders, and a cutting stylus that moved from side to side in a "zig zag" pattern across the record.
At the turn of the 20th century, Emile Berliner initiated the transition from phonograph cylinders to gramophone records: flat, double-sided discs with a spiral groove running from the periphery to near the center.
The gramophone record was one of the dominant audio recording formats throughout much of the 20th century. From the mid-1980s, phonograph use declined sharply because of the rise of the Compact Disc and other digital recording formats.What lies ahead folks is anyone’s guess! Any teckies out there with inside info???