To witness an address given by Aung San Suu Kyi. 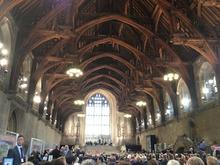 I had the extraordinary opportunity to go to Westminster Hall earlier today, to witness an address given by Aung San Suu Kyi.
I have the feeling that everyone in attendance had a sense of incredulity about the event.
We could all hardly believe that we were actually seeing and hearing her in person, after all these years ,
Those of us who have been advocating and campaigning for Aung San Suu Kyi’s release, and the human rights of the Burmese people (who’ve had to survive under the violent and restrictive military regime they’ve been forced to endure for decades ) were almost incredulous.
Aung San Suu Kyi is everything I might have imagined…Gracious, gentle, dignified, poised and strong.
She pointed out that Britain has a long established tradition of democratic rights, freedom of speech, and a system that in principle ( and generally in practice) protects and defends the rights of it’s citizens…Something we take for granted, and something that is not even in it’s infancy in Burma. I am hugely proud of the speaker of the House of Commons, who had insisted that she be given the opportunity to talk in a building that is hugely resonant, both in historical and political terms. Nothing could have been more appropriate and fitting.
I bow my head to Aung San Suu Kyi…To her personal sacrifice, and everything she stands for, and am deeply humbled by her example.