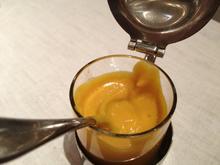 This is hilarious…!!
The chief mustard maker or "Mustardeer" would make their mustard in large oaken barrels, allowing each barrel to mature for a number of months. This maturing of the mustard produced a thick, leathery crust at the top of the barrel which would need to be removed before the contents could be tested. The consistency of the crust would be such that a specialised cutting implement was required to remove it. Initially a modified scythe was used but this often lead to the crust being ‘dragged’ at certain points and falling into the rest of the mustard causing it to lose some of its distinctive flavour. Over many years a specialised blade was developed that had an extremely thin leading edge which widened towards the centre and then tapered at the trailing edge although not to a sharp point. This allowed the blade to skim the majority of the top crust off, leaving a very thin slice which would be left on to protect the mustard. Due to the coarse, leathery nature of the top crust the blade, over time, would develop dull spots along it’s length and thus required constant monitoring. When it was time to remove the top crust the senior Mustardeer would instruct his apprentice to pass him the blade and would attempt to slice thorough the top leathery layer. The Mustardeer would know immediately if the blade was not sufficiently keen enough to complete the task and he would pass the blade back to the apprentice and say to him "I’m sorry, but That Doesn’t Cut the Mustard"