They even say it could be like the storm of ’87 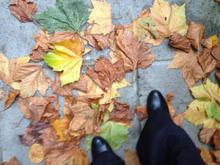 The UK weather forecast predicts that a massive storm is heading towards the British Isles from the Atlantic. They even say it could be like the storm of ’87, which swept across the UK with wild avengence, wreaking havoc in it’s path. I have to admit to a certain thrill at the notion of being hunkered down under the eaves so to speak. It’s starting to get dark in the late afternoon with piles and drifts of Autumn leaves scattered all over the streets. It’s still fairly mild but if this storm manifests, then I suspect it’ll bring a more seasonal chill along with it. Talking of which, check out this U Tube link to Russell Brand in the role of Shakespeare describing his play …"The Tempest". The man is a rabid genius! https://www.youtube.com/watch?v=npAo-fv5LgE