There’s something wonderful about … 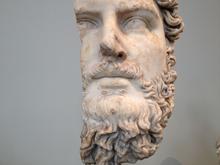 There’s something wonderful about being able to watch an entire TV series right the way through, uninterrupted by adverts or days of the week…Needless to say, I’m a massive Netflix fan…Whether that’s a good or bad thing I don’t know.
In any case..It’s given me the opportunity to discover some amazing programmes that I missed when they were originally broadcast.
I’m now going to wax lyrical about The Sopranos, which I believe is a work of genius.
James Gandolfini was/is absolutely riveting as the central lynch pin around whom all the other characters orbit and spin. It feels as if you  almost get to know him personally.
Anthony Soprano is so paradoxical…Deeply flawed, menacing, brutal, yet somehow likeable in spite of his repellant qualities. A guy’s guy.. a loyal buddy.. Father, husband, son and vile thug all at the same time.
The concept, the script,  the dialogues, the acting, the filming and editing, the humour, pathos  and choice of music… are all absolutely brilliant.
A part of me regrets that I hadn’t followed it when it  came out, but there’s something special about discovering it after the fact.
It’s  classic.. and timeless. People will watch and discuss it forever.