There’s something about pomegranates 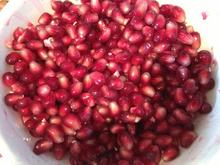 There’s something about pomegranates that’s so appealing. I’ve been a pomegranate fan since as far back as I can remember. Granted…They might not be the easiest fruit to deal with. It takes time and patience to carefully release each individual seed from it’s perfect packaging. The pith is very bitter, so you really have to be sure that there are no traces still attached before you commence consumption. It’s worth being fussy and meticulous when you’re preparing them.
Regarded as a symbol of prosperity and ambition by the ancient Egyptians, pomegranates seem to crop up in the myths of many religions and cultures, including Judaism, Christianity and Islam.
The ancient Chinese and Persians regarded the pomegranate as a symbol of fertility, and the Indian Ayurvedic medicinal system has used the pomegranate as a source of traditional remedies for thousands of years.
So here’s a glorious bowlful of ruby red edible gems for your visual gratification. They’re should be in season in a lot of countries right now. Are they hanging out in your local grocers store?