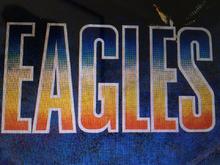 So last night I watched the first part of the documentary about The Eagles , which was released earlier this year. If you’re an Eagles fan it’s an absolute "must see". It’s beautifully made, with fascinating archive footage going all the way back to their formative years. Living in the UK in the Seventies, I hadn’t actually realised that they were the biggest selling US band ever, and I hadn’t realised that their line up was derived from so many other musical collaborations of the time. The scale of their success was astronomical, but there was a price to pay, as there always is, as the film reveals. It’s evident that there was an atmosphere of perpetual turmoil brewing for one reason or another. A collection of "alpha males" is always going to have challenges and limitations in any event. Being in a successful band, at the apex of whatever that means, with all the accompanying madness, trappings and pressures, is like living in a goldfish bowl on a roller coaster. The culture of excess, in terms of Sex n’ Drugs n’ Rock n’ Roll, eventually takes it’s toll on sensitive souls, with brilliant creative urges, massive egos and resultant behaviour disorders. Combine all that with the effects of abusive/ exploitative management and record companies, and deeply fomenting resentment between band members who feel they’re not getting their share, or clashing in terms of creative direction, then you’ve got a massively combustible combination. In any case – The songs remain beautiful, masterful and haunting to this day.
Ps..I’m on the look out for "sweet onions" now..I’d never heard of them till yesterday.. AND..They’re going in the fridge right away!