The concept is extraordinary. 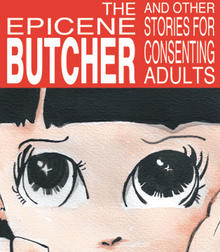 Last night I had the privilege of seeing an amazing piece of small theatre at ALEXANDER UPSTAIRS in Cape town.
Jemma Kahn is brilliant.. The concept is extraordinary..and I came away with my mind slightly blown!
If you get the opportunity to go to one of the shows, I couldn’t recommend it more highly.

The Epicene Butcher and Other Stories for Consenting Adults

Through the Japanese medium of Kamishibai, artist and performer Jemma Kahn relates the tragedy of The Epicene Butcher, a man who died because he ate what he loved. Other stories include Japanese classics and unwholesome tales of immoderate desire. Expect beautiful pictures and horrible ideas.

Directly translated, kamishibai means ‘paper play’. It is a traditional form of Japanese street theatre where pictures are slotted into a “Punch and Judy” style stage and revealed one at a time with vocal narration. As a form, kamishibai includes story telling, illustration and performance. There are less than 100 kamishibai performers left in Japan. Whilst living in Japan, Kahn studied kamishibai, under veteran performer Rokuda Genji.

Kahn and Rokuda wrote and performed collaboratively, most notably at the Atomic Bomb Memorial Day event in Hiroshima, 2009. In this production, the art of kamishibai is mis-used by the creators to tell stories of lust, violence and hysteria, the culmination of which is something not unlike an ex-patriots experience of Japan.

The show’s title story, The Epicene Butcher goes back to Japan’s Edo period (1603 – 1868) to tell the gothic tragedy of Japan’s most beautiful woman and most talented butcher.

Jemma studied Fine Art and Drama at Wits. She has been performing since graduation, most recently in Jane Taylor’s After Cardenio, Cape Town 2011. Her theater design could be seen most recently in Helen Iskander’s Planet B at the National Arts Festival. Jemma lived in Japan for 2 years, and now lives and works in Johannesburg.

Kahn, representing Greene’s soul, is superb… [she] commands our gaze like a kindly guide leading us through a hall of mirrors. – Steve Kretsmann reviews After Cardenio, West Cape News

What really makes the piece a success … is Helen Iskander’s direction of images, and the masterful set already mentioned. – Anton Kreuger, Planet B review, Cue