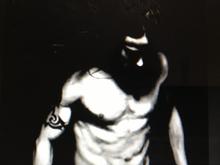 What are the qualities that represent a quintessential "rock star" of the male category?
I would say… a certain "louchness" – an absolute swagger- the prowess of Hercules combined with the intelligence of a street wise Aristotle- the sexuality of a female predatory cat, dancing with the moves of a transcendent shaman, mixed in with the yowling whoops and calls of  legendary blues kings..You must have wildness  – snake hips – gender ambivalence – totally individual style and a particular type of narcissism that leaves a trail of broken hearts in it’s wake..That’s a "Rock God" for ya!
Who are your  male idols if you have any? Do they still ring true for you?