Sending a picture I took yesterday 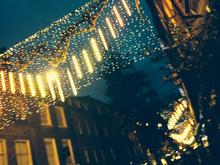 Sending a picture I took yesterday of Xmas lights in Covent Garden…The festive spirit is starting to kick in over here, as it were. In contrast, in another part of the world, this morning I read the reports about the horrendous typhoon that’s just struck the central Philippines and was heartened to read that the British government has already responded with a £6M aid package. It will take so much more to effectively respond to people’s needs, but at least it’s setting a good example. In my view, we are all global citizens, and it always feels good to know that countries are prepared to offer support in times of crises and emergency. There’s so much more to it however…This is what Wikipedia has to say …

"Climate change has brought about severe and possibly permanent alterations to our planet’s geological, biological and ecological systems.The Intergovernmental Panel on Climate Change (IPCC) contended in 2003 that “there is new and stronger evidence that most of the warming observed over the last 50 years is attributable to human activities”. These changes have led to the emergence of large-scale environmental hazards to human health, such as extreme weather, ozone depletion, loss of biodiversity, stresses to food-producing systems and the global spread of infectious diseases. The World Health Organization (WHO) estimates that 160,000 deaths, since 1950, are directly attributable to climate change. Many believe this to be a conservative estimate.
To date a neglected aspect of the climate change debate, much less research has been conducted on the impacts of climate change on health, food supply, economic growth, migration, security, societal change, and public goods, such as drinking water, than on the geophysical changes related to global warming. Human impacts can be both negative and positive. Climatic changes in Siberia, for instance, are expected to improve food production and local economic activity, at least in the short to medium term. Numerous studies suggest, however, that the current and future impacts of climate change on human society are and will continue to be overwhelmingly negative.
The majority of the adverse effects of climate change are experienced by poor and low-income communities around the world, who have much higher levels of vulnerability to environmental determinants of health, wealth and other factors, and much lower levels of capacity available for coping with environmental change. A report on the global human impact of climate change published by the Global Humanitarian Forum in 2009, estimated more than 300,000 deaths and about $125 billion in economic losses each year, and indicating that most climate change induced mortality is due to worsening floods and droughts in developing countries. This also raises questions of climate justice, since the 50 least developed countries of the world account for not more than 1% of worldwide emissions of greenhouse gases."

Heartbreakingly..It’s always the poorest and most vulnerable who seems to receive the hardest blows.