Onwards and upwards towards light and fluffy! 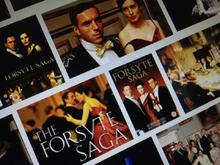 Onwards and upwards towards light and fluffy! Actually….Not quite so…I am guiding you one and all towards my most recent insane passion. I first watched it on black and white TV back in the day as a late teenager .
It was absolutely riveting. Then it was riveting again in it’s second ( colour) incarnation, (which I missed at the time) and….it’s an utterly riveting revisit right now on NETFLIX!!!
It’s the TV series equivalent of crack cocaine, with no health risk implication..Except perhaps to your eyesight and sleep patterns! Press "play" at your peril
ps..If you don’t have a computer or television set, then you can always read the books..by the late John Galsworthy.