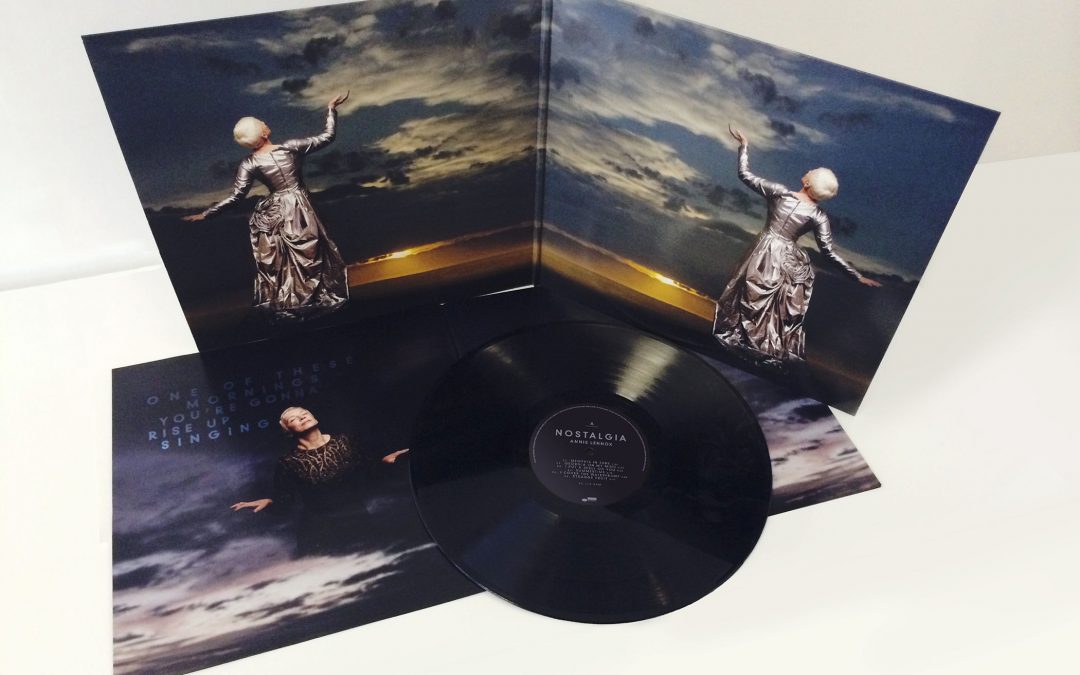 September 30, 2014 – New York, NY – Nostalgia, the seventh solo album from legendary singer-songwriter Annie Lennox, is out today on vinyl. It is available on Amazon and at nostalgia.annielennox.com, The album features Lennox’s fresh and hauntingly beautiful takes on iconic American compositions by such artists as Hoagy Carmichael, Duke Ellington, George Gershwin, Billie Holiday and Screamin’ Jay Hawkins. The digital, CD and deluxe CD/DVD editions of Nostalgia, will be out October 21.
“In this fast paced digital age it feels so appropriate and befitting that my new record Nostalgia is coming out on vinyl, just as it would have done back in the 30’s, when these songs were first mastered and presented to the world,” said Annie Lennox. “Listening to the particular sound quality of the record on vinyl is a unique experience and I very much hope that people take the opportunity to discover this for themselves.”
Lennox will talk about the personal meaning she found in the songs of Nostalgia when she guests on “Good Morning America” on Wednesday, October 22, and she will be the subject of a feature on NPR’s “Morning Edition” airing the same week.
Annie will be signing the vinyl edition of Nostalgia – which is contained in a gatefold jacket that also include a 12-page book with photos and lyrics – at a special in-store appearance at Amoeba Music in Hollywood, CA on October 10. Amoeba Music is also sponsoring Lennox’s sold-out October 16 appearance at The GRAMMY Museum® in Los Angeles. The event is the latest installment of the museum’s popular The Drop series. Over the course of the evening, which will be moderated by Vice President of The GRAMMY Foundation and MusiCares Scott Goldman, Lennox will speak about the making of Nostalgia, take audience questions and perform songs from the new album. New Yorkers will have a chance to sit in on Annie’sconversation with author/Rolling Stone contributing editor Anthony DeCurtis on October 21 at Barnes & Noble-Union Square, where she will be signing CDs.
Fans who pre-order the digital edition of Nostalgia, available HERE, will immediately receive “I Put A Spell On You” and, beginning today, a second instant grat track: Annie’s nuanced interpretation of the languid George Gershwin/Dubose Heyward composition “Summertime.”
“With over 25,000 recordings of  ‘Summertime,’ you can begin to get a sense of just how immensely popular this legendary Gershwin song truly is. From all the songs on Nostalgia, this is the one I can say I knew best, having heard it since as long as I can remember,” noted Lennox. “The challenge was how to find a different way to approach it, so that the listener might hear it as if ‘for the very first time.’ Strangely enough, I didn’t have to spend too much time thinking about it. The recording was pretty much done on the first take and that was that…”
Lennox live performance video of “Summertime” will premiere tomorrow, October 1, on WSJ.com and can be seen on VEVO beginning October 2. It is the latest in a series of live performance videos that will continue to roll out in the coming weeks.“Georgia On My Mind” will debut the week of October 13 and additional live videos will be announced soon. Lennox’s revelatory performance of Screaming Jay Hawkins’ “I Put A Spell On You” can be viewed HERE.
The live performance video of “I Put A Spell On You” will be included in the deluxe CD/DVD package. Available exclusively on Amazon, this edition includes Nostalgia plus a 36-page book with photos and detailed notes on the songs and lyrics and a DVD that features Annie discussing the album. The deluxe CD/DVD package can be pre-ordered HERE.
On Nostalgia, Annie pays tribute to some of the greatest artists of the 20th century, interpreting compositions that have moved her, stripping them down to their emotional and musical core and making them her own. Songs like “Memphis In June,” “Strange Fruit,” “I Can Dream, Can’t I?” and “God Bless The Child” continue to resonate as we face the complexities of modern life. Lennox created the striking packaging for Nostalgia herself and is sharing track-by-track song histories, beautiful photography and artwork, videos and more at nostalgia.annielennox.com,