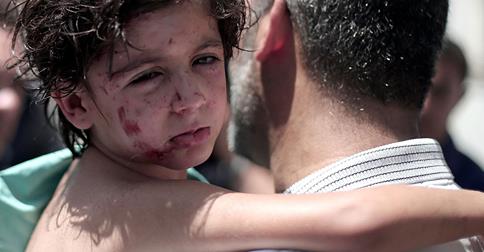 NO WINNERS
“World stands disgraced as Israeli shelling of schools kills at least 15”..
UN condems IDF attack on sleeping children as violation of international law
Death toll now more than 1,300 after three weeks of fighting.
( Excerpt from The Guardian newspaper)
At the UN school the first shell came just after the early morning call to prayer, when most of those taking shelter were asleep, crammed into classrooms with what few possessions they had managed to snatch as they fled their homes.About 3,300 people had squashed into Jabaliya Elementary A&B Girls’ School since the Israeli military warned people to leave their homes and neighbourhoods or risk death under intense bombardment. Classroom number one, near the school’s entrance, had become home to about 40 people, mostly women and children.As a shell blasted through the wall, showering occupants with shrapnel and spattering blood on walls and floors, Amna Zantit, 31, scrambled to gather up her three terrified infants in a panicked bid for the relative safety of the schoolyard. “Everyone was trying to escape,” she said, clutching her eight-month old baby tightly. Minutes later, a second shell slammed through the roof of the two-storey school. At least 15 people were killed and more than 100 injured. Most were women or children.Pierre Krähenbühl, commissioner-general of the UN agency for Palestinian refugees, UNRWA, said the shelling of the school was a “serious violation of international law by Israeli forces”.Krähenbühl said: “Last night, children were killed as they slept next to their parents on the floor of a classroom in a UN-designated shelter in Gaza. Children killed in their sleep; this is an affront to all of us, a source of universal shame. Today the world stands disgraced.”Khalil al-Halabi, the UN official in charge of the schools in the area, was quickly on the scene. Bodies were littered over the classroom, and the badly injured lay in pools of blood amid the debris and rubble caused by the blast. “I was shaking,” he said. “It was very, very hard for me to see the blood and hear the children crying.”