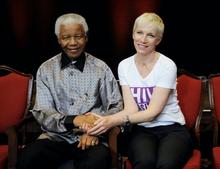 Nelson Mandela became 94 years old today. I wanted to send that out because I share a tremendous sense of appreciation and respect for him, along with millions of other world citizens. His name is synonymous with so many astonishing accomplishments..including not only his dedication and leadership in terms of human rights and justice, but also, the tremendous personal sacrifice he undertook in his commitment to the long term goal towards the overthrow of apartheid. He would be the first to say that it was a collective effort with his comrades in the ANC,all of whom were part of the struggle. For me, Mandela is a symbol of the highest living proof of human capability and potential. I don’t "worship" him, but I absolutely honour and revere his dedication, his vision, and his leadership. I yearn to see those qualities in other people in influential positions, but sadly realise that that kind of calibre is disappointingly thin on the ground. Decency, integrity, honesty, humility, compassion, and brilliant vision seem to be desperately lacking wherever these qualities are most urgently required, whether in government or elsewhere in places of power. Bafflingly and heartbreakingly so. Meantime… let’s acknowledge the beautiful man himself, and take a moment to honour him and his astonishing accomplishments.