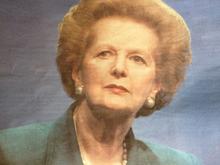 Margaret Thatcher’s death has provoked an outpouring of polarised responses, clearly reflecting how people felt, and still feel about her, right up to the present day.
As a political leader, her style was strident (some would say strong), inflexible (some would say firm), authoritarian (some would say powerful ), tough (some would say resolute), arrogant ( some would say assured), snobbish (some would say she had a sense of values), and  faintly ridiculous, ( some would say patriotic). She was the headmistress and we were the renegade schoolchildren. She was the leader and we were the ardent followers…all depending on which side you happened to  be on. Despite the evidence of her gender, she could never be described as a Feminist. She was more of a singular woman in the old boys club than a defender of women’s rights.
Although she was the daughter of a humble grocer shop owner, her aspirations far outreached her roots..which is tremendous but… she failed to have any real understanding or connection with ordinary people, riding rough shod over their lives, leaving them to deal with the aftermath of a decimated industrial era. Entire communities disintegrated with generations being left to cope for decades down the line.
I admire dedication, strength of purpose and vision, these are all fine qualities but when political policies are so brutally hard line, that they affect people’s entire existence at a pen stroke (whilst being told to pull themselves up by their boot straps), you can be sure that the spirit of dictatorship has arisen. From my own perspective I keep recalling the heavy sense of oppression that saturated every aspect of the Seventies, and I can’t say I have any sense of fond nostalgia.