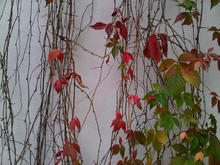 Just some trailing ivy vines I spotted on a recent walk around my hood. You really need to just get outside to take in the details.There’s so much going on out there..Which leads me to mention the last two films I saw..Lars Von Trier’s Melancholia and Woody Allen’s Midnight in Paris..I found
Melancholia to be a bit slow..but then,you would,wouldn’t you?! I mean, with a title like that, it’s not exactly The Sound of Music! The film is exquisitely shot, with some marvellous acting..especially from Kirsten Dunst, who’s simply magnetic. Woody Allen’s latest offering is charming, quaint, and totally feelgood..leaving you with a warm fuzzy feeling, as opposed to the next worst thing to witnessing the end of the world!