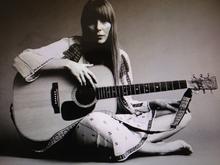 "When the dust settles, Joni Mitchell may stand as the most important and influential female recording artist of the late 20th century,"

I don’t know if I would have ever thought of becoming a singer/songwriter/recording artist/performer if it hadn’t been for Joni Mitchell. With her glorious voice, inimitable guitar style, and poetic and acute lyrical observations, her songs sank deeply into my psyche and bloodstream ( along with just about everyone else on the planet!).
In the early Seventies you could almost count every female singer songwriter on the the fingers of two hands. She smashed the glass ceiling, and since that time I honestly don’t think there are many who come anywhere near her.
Here’s a list of her studio albums… and a few things about her that you may or may not be aware of!

1968: Song to a Seagull
1969: Clouds
1970: Ladies of the Canyon
1971: Blue
1972: For the Roses
1974: Court and Spark
1975: The Hissing of Summer Lawns
1976: Hejira
1977: Don Juan’s Reckless Daughter
1979: Mingus
1982: Wild Things Run Fast
1985: Dog Eat Dog
1988: Chalk Mark in a Rain Storm
1991: Night Ride Home
1994: Turbulent Indigo
1998: Taming the Tiger
2000: Both Sides Now
2002: Travelogue
2007: Shine
Joni was born Roberta Joan Anderson on November 7th 1943 in Fort Macleod, Alberta, Canada to Bill and Myrtle Anderson. Her mother’s ancestors were Scottish and Irish, and her father’s were Norwegian and Sami .
Her first musical obsessions were Debussy, Ravel, Stravinsky, Chopin and Beethoven, and she briefly studied piano between the ages of 6 and 7, but dropped out because she wanted to play by ear.
At the age of 8, Joni contracted polio during a 1951 epidemic in Canada. Bedridden for weeks in hospital, Joni became aware that she would have to move across the hall and live in an iron lung for the remainder of her life if her condition worsened.
As she later described, it was during her time in hospital that winter that she first became interested in singing. She told the story later: "They said I might not walk again, and that I would not be able to go home for Christmas. I wouldn’t go for it. So I started to sing Christmas carols and I used to sing them real loud… The boy in the bed next to me, you know, used to complain. And I discovered I was a ham."
Later, she started singing in small nightclubs in Saskatchewan and Western Canada, and busked in the streets of Toronto.
Joni moved to the USA in 1965, and after touring constantly, she began to be recognised for songs like Chelsea Morning, Both Sides now, and the Circle Game. Her debut album was recorded in 1968.