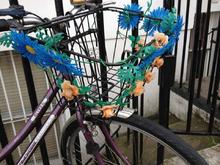 Inspiration is everywhere.. Even in a bicycle basket ..This one’s a star!..Decorated with plastic flowers, it cheered up my day recently. There are so many viewpoints and opinions to be expressed in all things.. especially when the subjects seem to be particularly polarising. From my background, I was brought up with the perspective that I was "working class". I went to a "middle class" school and managed to speak in a way that blended in, as accents and pronunciation seem to be the biggest clues as to your background, and most kids just want to "fit in" with whatever’s around them. In the countryside they had a strong dialect that I could speak and make myself understood with. So for me there were three distinctly different accents/languages to communicate with people. If ever I met someone with an "upper class" accent I’d immediately find it intimidating..and it took me years to get over that perception. People can be snobbish and biased.. all the way through every level of society. Looking up, or looking down at others. My view is that everybody has an intrinsic, inherent value, and it has nothing to do with class, money, fame or power. I will never be "upper class" neither do I want or aspire to be. That’s freeing as and of itself.. I don’t want to be classified by class,colour, gender, race or bank account.