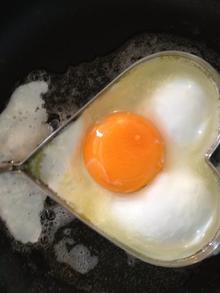 I’m absolutely bowled over ( if you’ll pardon the pun!) by your extraordinary culinary skills!! I had no idea I was blogging to such passionate foodies out there! It’s given me an idea…to ponder on and share when I’ve figured it out a bit more…
Staying with the food theme, I’m posting a photograph of my breakfast egg this morning. It didn’t look as perfect on the plate as it did in the frying pan, but doesn’t it look splendid? I’ve just discovered the John Lewis Food Hall on Oxford Street!
For some reason I wasn’t aware of it up till yesterday. Heaven is a Food Hall! I was in such a daze that the other shoppers were bumping into me..Hilarious! Now a very important food matter..
In terms of carrots…I find their skin too bitter, so I peel it off..even if it’s removing the best bit in terms of nutrition..There ya go…Some things are just like that! It’s so tricky to know what’s good or not good to eat over here in food hall land..I get completely confused. When I was a kid we never saw courgettes, broccoli, aubergine, asparagus, artichoke….even spaghetti was regarded as foreign, until the mid 70’s. We just ate root vegetables, basic fruit, and cheap cuts of meat. I swear to god, it was totally different. That’s why I love reading Mrs Beaton’s recipe books, as you get a sense of what people did back in the days when they didn’t have tinned frozen or processed foods. It’s so simple, that it feels almost comforting.
My mother used to be a cook, and she learned how to create economical dishes that lasted for days, so a chicken became a soup and sandwiches or a curry. We hated waste, and I still do, but find it hard to avoid with the kind of life I lead.
What struck me most about yesterday’s blogs was the level of sophistication and diversity in your chosen ingredients..People from Europe preparing Thai food, and..I presume that Italian food is very popular in Japan…??
I wonder which cuisine is the most preferred across the board..Are we all multi cultural in our choices now that the food industry is global. Of course, the great leveller in all this is that millions go to sleep hungry every night.