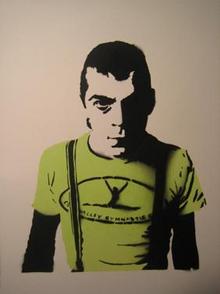 I’m posting this picture of Ian Dury in honour of his brilliant song Spasticus Autisticus, which was featured in the Paralympic opening ceremony last night!
The rage that Ian felt was searingly articulated in his life’s work. He was a genius in his own particular way…both blindingly intimidating, razor blade sharp and darkly hilarious.
Ian was an impressive blend of Long John Silver, Mack the Knife and the Artful Dodger, as he swagger limped onto the stage. He was uniquely himself…A visionary poet artist bogeyman.
I can’t help but think about him today, as yesterday I believed we may have witnessed a turning point in the invisibility of disability…Not before time!