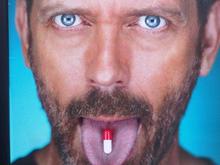 Hugh Laurie looks very good these days..it must be something to do with the pills he’s taking. I actually think he looks even better than he did about eighteen years ago. I had a great time with him, filming the video for Walking On Broken Glass. He was absolutely lovely…and hilarious! John Malkovich was incredibly gracious and came into film with us, despite the fact that he had a play to perform that night elsewhere. Sophie ( Muller) and I couldn’t believe that he was actually going to come…and we were so excited about it, that we could hardly speak! I honestly don’t know how it was all pulled off..it was such a mad production .
Click here to watch the video