Get together. Get active and engage. 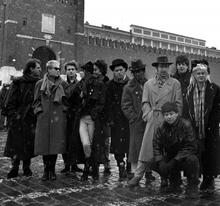 There have been a few messages from Russia coming through recently…I’ve only been to Russia once, in March 1989, on a three day excursion to Moscow, in support  of Greenpeace’s efforts to educate and impact environmental change. It was quite a trip.. along with the Edge from U2, Peter Gabriel, David Byrne, Brynsley Forde (of Aswad), the Thompson Twins, Chrissie Hynde, Jerry Harrison, and Karl Wallinger (of World Party)  As Greenpeace put it, “The gathering in Red Square represented, by several orders of magnitude, the largest and most potent collection of rock’s elite ever to gather in Eastern Europe. It also serves as a sort of crescendo to rock-and-roll’s environmental chorus. Like dozens of other major rock acts, the artists who gathered in Red Square are converts to eco-activism. They were in the Soviet Union as volunteers, to promote the release of an album of songs they had donated to Greenpeace. The record, called Breakthrough, would introduce environmental issues in general, and Greenpeace in particular, to young people in the Soviet Union. Each record included a brochure that described environmental problems, Greenpeace and provided an address in the Soviet Union for more information.” Elsewhere in the world, the album was known as Rainbow Warriors, however Greenpeace wanted to use this as an opportunity to use popular music to reach out and break through (as it were) to the millions in the then-police state of the Soviet Union. It was 1989 and the fall of the Berlin Wall had yet to happen. Billy Joel had just completed his tour of the Soviet Union a couple of years prior and the feeling of glasnost was still present. Greenpeace took this as an opportunity to get their message out.

1989 is a long time ago now, and many things have changed since then. I think people were still uncertain of how things would turn out, but there was a feeling that "things could only get better".. To quote a party political anthem of it’s time in the UK.. After the fall of the Berlin Wall and the abolition of apartheid, there was a tremendous sense of optimism..People felt that human rights/freedom and justice might prevail after all. I still hold and value these ideals, while realising that in many countries, the powers that be are oppressive, corrupt and exploitative.

Pussy Riots tactics seem extreme and outrageous to many people. That is a deliberate stratagem on their part, to create as much attention, focus and reaction as possible. They did no damage, and they hurt no one. In that context, I believe that their sentences were overtly harsh. There are clearly complex challenges when it comes to civil rights/gender rights and freedom of speech…not only in Russia, but in countless countries around the world, including the West. Over the years I’ve lent my voice and support to many causes, although my main focus over the last decade in terms of advocacy has been HIV/AIDS. If you feel strongly about something, then you can find  like minded people and organisations that do great work, and give them your support. Get together. Get active and engage.