Furthermore on the subject of Rawk Gods.. 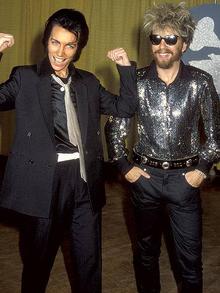 Furthermore on the subject of Rawk Gods..
I saw a utube interview with Anthony Keidis, and realised that he naturally embodies certain qualities that seem to sum up the male rock god/legend/star persona…and I started trying to define the elements of "whatever it is" that has had so much appeal over the last fifty years or so, and what the magnetic attraction towards it might be. As a woman, and an erstwhile performer, I find this subject fascinating.
The male archetype is clearly very powerful and compelling to both men and women. (Do the men identify with a projected/ idealised version of who they would wish to be themselves?) It’s fascinating that so many people have been drawn to this Western phenomena for generations, and interesting to go deeper into asking questions about whatever "performance/persona" means at a cultural/social level.
When I tried to nail the beast, I came up with a description that suited the likes of young Elvis Presley, Mick Jagger, Jim Morrison, Freddie Mercury etc….(the drummer from the Muppets??!!!) yes..well a lot of diverse names were bandied about!
Clearly a lot of gentlemen came up several times over, and quite a few of whom are no longer with us. What did they give us? Escape.. taboo…beauty…diversion…a projected ideal..identification..entertainment…magic.. a sense of liberation and power..??
Thanks for sending in your responses..Great reading!
ps..I may once have been once called a gender bender, but I have never been man!! ( Back…Trollies!!..stay back!!!)