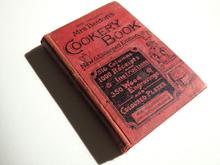 Food for thought..
Here’s my somewhat dog eared copy of the Cookery Book – first published by her husband, Samuel Beeton in 1861, it was an immediate success,selling 60,000 copies in its first year and totalling nearly two million up to 1868.
Commonly known as one of the first and best cookery writers, the name "Mrs Beeton" still has iconic status in Britain .
Isabella Beeton was 21 years old when she started working on the book, and she died, somewhat prematurely, at 28. A year after Isabella’s death, Samuel was forced to give up the copyright on all his publications due to the collapse of Overend and Gurney, a London discount house to which he was in debt. To save himself from bankruptcy he sold the copyright to publisher Ward, Lock and Tyler for £3,250, though he continued to run it. Ward Lock’s revisions to Household Management have continued to the present day and kept the Beeton name in the public eye for over 125 years. Mrs and Mr Beeton are both buried at West Norwood Cemetery in South London.