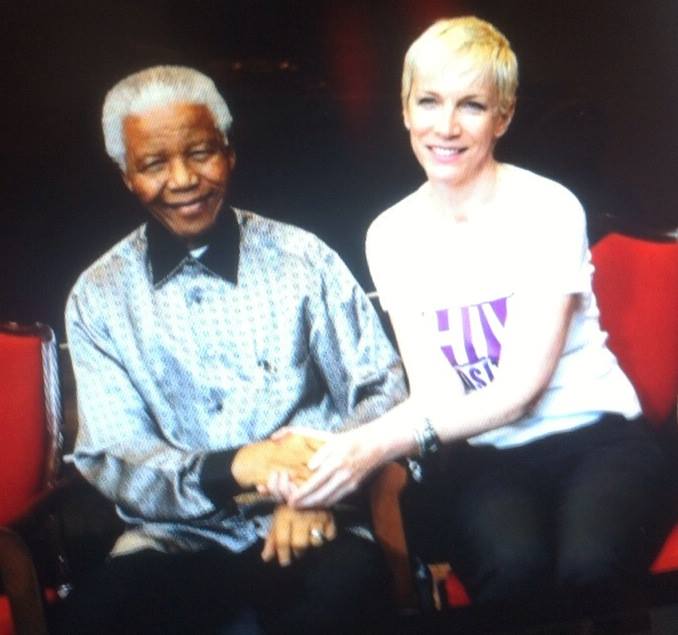 I first heard about the apartheid regime when I was a teenager living in Scotland in the early 70’s. Back then I found it hard to believe that a country could forcibly separate and divide it’s citizens according to their race and skin colour.
I thought the concept was heinous, so I was emotionally invested in the overcoming of the system. Musicians with the same shared viewpoint boycotted the country in the 80’s – refusing to perform there, especially in the holiday resort of Sun City, which offered an opportunity for lucrative financial gains for performers ( remember the song written by Little Stevens ?) Eurythmics donated our royalties to the ANC at that time, as well as donating to the Anti Apartheid Movement in the UK.
We performed for Nelson Mandela’s 70th Birthday Tribute at Wembley Stadium and felt honoured to make a contribution towards the effort to end apartheid.
The first time I set foot in South African was when I was invited to Cape Town in November 2003 to perform for Mandela’s 46664 HIV Aids Foundation. It was a hugely significant moment for me because the artists were given an opportunity to directly witness the effects of the Aids genocide ( as Mandela described it at that time) in clinics, hospitals, orphanages and people’s homes. Thousands of people were dying on a daily basis and a whole generation was decimated by Aids.
I’ve been advocating and campaigning about this ever since and that is why I’m so passionate about the Nevergiveups Gogos. The whole world stopped to honour Mandela after his passing. To honour his legacy, the least we can do is to know about and support GAPA – Grandmothers Against Poverty and AIDS