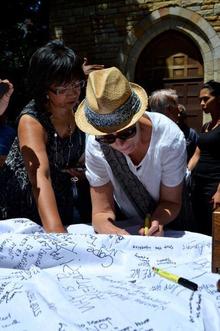 Excellent news!! "The Make It Happen" petition has contributed to the growing call to action with regards to Gender Based Violence in South Africa. As you can see from the letter below from Zubeida Shaik, people are starting to look for collective ways to ensure that the issue is effectively responded to.

Subject: RE: SUPPORT for CAMPAIGNS to END GBV

It has been a while since 14 February 2013, and I am very grateful that many of us finally met personally during the various public demonstrations all over the Western Cape, during February 2013, to END Gender and Prejudice based Violence!
I personally believe that there are way too many "campaigns" and "initiatives" all working in isolation towards achieving the same goals. I am a strong advocate for collaborative efforts and the sharing of knowledge, skills, experience and resources to achieve a common purpose.
As you might be aware, the South African Parliament has over the last six months run a very extensive public consultation process to inform the development of a Public Participation Model. Parliament has also been undergoing institutional restructuring to streamline functions, remove duplicative areas and create a machine that will be more efficient, cost-effective and with sufficient organisational capacity, both for Core Business and Member Services. We trust that this newly formed structure, with its revised mandates will adequately fulfil Parliament’s role as Custodian of the Constitution to serve the South African nation better than before.
I am also eager for Parliament’s soon to be formed "Public Participation Section" to work closer with civil society in particular; to ensure that sector representation is included in policy making processes at all levels. We accept that many national priorities exist, but a concerted effort is planned to consult more broadly and on an ongoing basis, and to have different sections solely assigned to specific portfolios.
In recent months, senior politicians, including the President, influential business people, renowned social commentators and media have put the ‘spotlight’ on Gender and Prejudice-based Violence. I therefore intend spending my time on efforts to ensure that we bring together a wide range of national stakeholders to share information, knowledge, skills, experience and resources in an attempt to fast track the collective contributions to putting an to END Gender and Prejudice-based Violence in South Africa.
We have also seen an increase in global support, with the One Billion Rising Campaign (OBR), the Roadshow of international superstar Annie Lennox, supported locally by renowned feminist, gender and political activist and internationally acclaimed academic, Ms. Rhoda Kadalie, and the ‘Say No Campaign’, which serves as an umbrella body for many international interventions. A "Western Cape Collective", many of who have supported the recent global campaigns and continue with local efforts will have a DeBriefing of recent efforts, convened by the Parliamentary Millennium Programme. This meeting will create a platform for parties to share their achievements of events and interventions since the beginning of the year, report on challenges encountered, share knowledge, skills, and experience and present ideas on their planned interventions going forward.
I request that you please avail someone from your management team based in Cape Town to join this meeting, which we sincerely trust will be the beginning of several complementary, collaborative partnerships as we ask Quos Vadis?
One thing that became very clear during the recent global campaigns, is that while many individuals, gender violence experts, academics, politicians and national NGOs and Community based organisations are fighting the scourge of attacks on women and children in particular, many are focusing on different aspects. The value in this, is that these efforts are in so many ways complementary, but some, and mostly Community Based Initiatives fall to the wayside as we continue our daily battles, primarily due to resource constraints.
I therefore call on you to please consider supporting the efforts of the soon to be formed "Public Participation Section" in Parliament, and to assist in bringing like-minded people together, to share resources and to encourage a coordinated approach to ending GBV. It is important that we work in a landscape where different tools developed by different organisations are used to its full potential within a national strategy (to be collectively developed).
This process and action will not only strengthen the national efforts, sharing resources (not only money, but existing successful programme models) will ensure that we maintain broad participation and sustain momentum with all campaigns designed. Collectively we will continue to show solidarity in the fight against GBV and answer the plight of those who continue to be victims and survivors of abuse.
I attach a copy of the Invitation that was sent out on social media platforms, and look forward to your participation. PLEASE NOTE: This is essentially a DeBriefing of activism, lobbying and other forms of action to fight GBV over the last six months. There will also be a specific focus on support given to the One Billion Rising global campaign on 14 February 2013 (VDay). A larger, facilitated meeting, with more involved parties will be convened at a later stage.
We look forward to your participation… ALUTA CONTINUA because GBV MUST END NOW!
Much Respect & Appreciation,
ZUBEIDA

Zubeida Shaik (Ms.)
Parliament of the Republic of South Africa