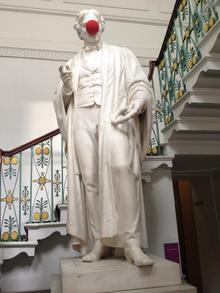 I spent a couple of hours at The Royal Institute of Great Britain earlier today being interviewed by Comic Relief’s Chief Executive, Kevin Cahill, in front of an audience of the entire 250 of their staff team during their annual one-day conference. The reason I was invited to speak is because I’ve had an ongoing partnership with them for several years, and I can genuinely say that it was an honour to be in their company, and have a chance to share and express my views. Comic Relief is a major charity based in the UK which strives to create a just world free from poverty. Their mission is to drive positive change through the power of entertainment. Since the 25 years when they first began, Comic Relief has raised millions of pounds through two major fundraising campaigns …Red Nose Day and Sport Relief. The money is spent in the best way possible to tackle the root causes of poverty and social injustice. I’m so proud of them and of the British public, who consistently show their support for the incredible work they do through the generosity of their donations. Check out www.comicrelief.com/ for information.. You’ll be amazed!