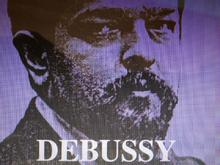 Happy 151th birthday Archille -Claude Debussy!! ( b.22 August– d.25th March 1918)
If you were alive today you would be blowing out a great deal of candles!
Along with Maurice Ravel, you were one of the most prominent figures associated with impressionist music, although you hated the label.
Noted for it’s sensory component and disregard for conventional "tonality," your work reflected the turbulence in your own life. From the start,though clearly talented, you were argumentative and experimental,favouring dissonances and intervals that were frowned upon. Like Georges Bizet,you were a brilliant pianist and an outstanding sight reader, who could have had a professional career if you had pursued it.You grew up in a poor neighbourhood in Paris, but then came under the patronage of a wealthy Russian aristocrat.You fell in love with the beautiful young wife of an architect, who was also a singer who inspired many of your early compositions such as Clair de Lune.
You were granted the state scholarship Grand Prix de Rome, to pursue your creative work, and were given a three year stay at the Villa Medici in Rome, but left and returned to Paris after two years, feeling at odds with the place.
You adored food, women and music, and were admired and appreciated for your deep intensity, soft sensuality and incredible precision.Your work was influenced by Wagner, Borodin and Mussorgsky.
Following the birth of your daughter, you moved to England to avoid scandal, subsequently marrying your daughter’s mother. During that period you wrote the piano suite, Children’s Corner.
You were a crucial figure in the transition to the modern era in Western music, and in 1903 you were made Chevalier of the Legion of Honour. You died from rectal cancer on March 23th 1918 in Paris.
Any other Debussy lovers out there??