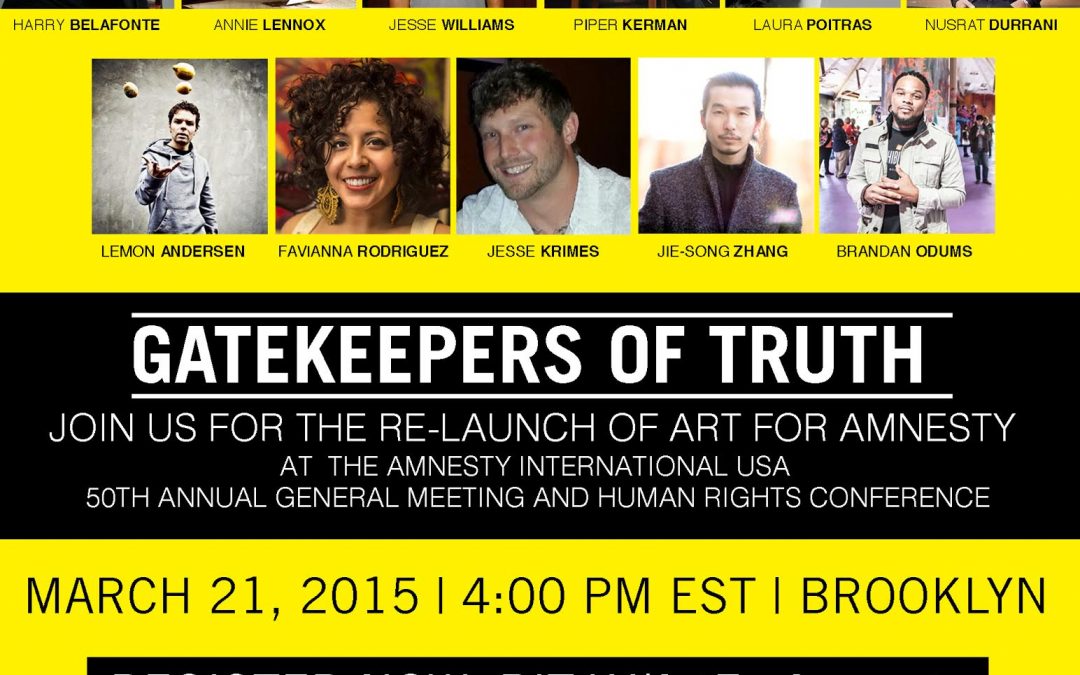 The gathering coincides with the relaunch of Amnesty International USA’s Art for Amnesty program in partnership with the global Art for Amnesty, which works with artists, musicians, filmmakers, museums, art galleries, and entertainment industry non-profitsaround the world committed to human rights. By adding their voices to the organization’s campaigns, artists help reach out to their audiences. Using their exceptional skills and talents, they spread the human rights message across countries and continents and inspire people to act.

The Annual General Meeting will be held in Brooklyn, N.Y. from March 20-22 at the New York Marriott at the Brooklyn Bridge. AIUSA will be celebrating 50 years of gathering human rights activists from around the country who come together to engage in networking opportunities, actions, inspiring plenaries, outstanding key notes, and hands-on workshops as well as to shape the policies of the organization.

The theme of this year’s AGM is “From Moment to Movement” because AIUSA believes every action taken to defend and advance human rights makes the global human rights movement stronger and ever more unstoppable. We will elevate all the ways we sustain activism and drive impact while celebrating our collective power to create solutions that respect everyone’s human rights.

The Annual General Meeting gives AIUSA members, staff and allies the opportunity to come together to take action, participate in workshops and hear from experts, policymakers, celebrities and activists on pressing human rights issues.

In the past year, AIUSA has been at the forefront of human rights developments both in the U.S. – including observing the protests in Ferguson, Mo. and calling for reparations for those tortured decades ago while in the custody of the Chicago Police Department – and abroad, including calling for the protection of civilians terrorized by the armed group Boko Haram in Nigeria and urging for the release of imprisoned blogger Raif Badawi in Saudi Arabia.

Updates to the conference schedule, including event descriptions, notable guests and media opportunities, will be posted regularly to www.amnestyusa.org/events/human-rights-conference
WHAT: Press Conference with Artists for Amnesty leadership during Amnesty International USA’s 50th Annual General Meeting

WHERE: New York Marriott at the Brooklyn Bridge

Follow along with updates using the hashtags #ArtForAmnesty and #AmnestyM2M

Amnesty International is a Nobel Peace Prize-winning global movement of more than 7 million people in over 190 countries who campaign for a world where human rights are enjoyed by all. The organization investigates and exposes abuses, educates and mobilizes the public, and works to protect people wherever justice, freedom, truth and dignity are denied.