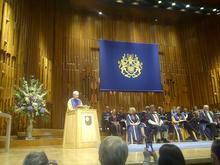 We are delighted to announce that on 30th March  2012 Annie Lennox was awarded an honorary degree of Doctor of the Open University for her activism. Click the title of this story to read Director of The Open University of Scotland, Dr Jim Miller’s introductory speech and Annie’s response on receiving the degree. Visit the blogging room to read Annie’s blog from the day.

Dr Jim Miller Director of The Open University:
"Occasionally in life we all have the good fortune to encounter a truly remarkable human being. Annie Lennox is one such person. To my generation she is a cultural giant, and it is more than a little pleasing that subsequent generations have also come to appreciate her many gifts.
Her musical talent and achievements are beyond question. She has sold millions of albums worldwide, both as part of the duo Eurythmics and as a solo artist, and has received myriad music awards.
Annie received an OBE in 2011, one of many honours she has gathered for her outstanding campaigning achievements. It is in recognition of her humanitarian work that The Open University has singled her out for special attention on this occasion.
Using her considerable resource, drive, ability and influence, Annie has effected change for vulnerable people here and abroad. Working with some of the world’s foremost thought leaders, including Nelson Mandela, Annie has coaxed and cajoled, pressured and persuaded and never accepted ‘no’ for an answer.
In Cape Town in 2003, she saw first-hand the devastating effect that HIV/AIDS was having in the townships, with women and children its chief victims. Consequently she was instrumental in setting up the SING campaign, which helps prevent the spread of HIV in South Africa in several ways, most importantly through treatment literacy programmes. SING also aims to increase global action to support infected and affected women and children, including in the UK.
Last year, in a speech to the United Nations, Annie challenged world leaders to consider and reflect on the desperate situation faced by women in Africa by saying:
‘What does it say about us as human beings if, after having made all these massive steps forwards, millions of women and girls do not reach their full potential, but continue to die prematurely?… What does it say about leaders of nations in powerful positions who do not do everything in their power to ensure that the health, human rights, security and dignity of women and girls is definitively protected?’ Annie Lennox has chosen to concentrate on improving the lives of women and children whose lives have been blighted by HIV and AIDS. Her motivation for championing this particular cause was her sense of indignation and a drive to make a real difference. Confronting the establishment, including the Vatican, on the rationale of their pronouncements has become a trademark. This is not done in a brash, bullying approach to such challenges but in a steely, diplomatic manner, which makes it impossible to dismiss or ignore.
And change is precisely what she has achieved. Annie Lennox has made a difference on an international scale and not for the glory and aggrandisement of self but for the benefit of vulnerable women and children.
Ask yourselves this – how many others have used their status and influence to achieve the same? Pro-Vice-Chancellor, by the authority of Senate, I present to you for the honorary degree of Doctor of the University, Annie Lennox."

Annie Lennox:
"The first thing that came to mind when I was told that I was going to be awarded an Open University Honorary Doctorate was "I am not worthy". Apart from a few ancient Scottish O Grades and  A Levels from decades ago, I actually have no official qualifications whatsoever. And the other irony is that I’m also a college drop out.So somebody here must be making a terrible mistake!
My father always used to tell me that if I didn’t stick in at school, then I’d end up in a factory. And it seems he might have been wrong about that one as well!
At a time in my life where I have more years behind me than years going forwards, I now have the benefit of hindsight, and looking back truth to tell it really has been a peculiarly interesting journey so far.
One that was created more out of rebellion away from convention, than by adhering to a prescribed norm.Although I don’t prescribe much to labels, if I were to describe my social background, I would say that it was working class.
My father left school at the tender age of fourteen to start serving his apprenticeship in the shipyards in my home town of Aberdeen, in the North East of Scotland.
I genuinely believe that if he had had the opportunity to receive a further education, then his life’s trajectory would have been very different, and I suspect it was the knowledge that "education" was the key to a better life, that prompted him to give me  such dire warnings about what would happen to me if I didn’t do my homework.
In the 50’s and 60’s, the Scottish education system still worked on the premise of "threat" or "humiliation" as the motivators to bring about focus and concentration in school children.
As an inveterate day dreamer, I used to drive my teachers apoplectic with my lack of concentration, but for some reason, the view out of the classroom window almost always held more intrIgue than the maths, or biology lessons.
I was more artistic than academic, and this seemed to cause  certain kinds of problems. So at the  tender age of fourteen I started to realise that I was actually  a definite "outsider" meaning that I didn’t feel  I belonged to any particular social group, culture, religion, or easily prescribed identity. My education has  subsequently come more from life experience than  academic study, so if today’s honour can  generously incorporate my "outsiderishness" then I am more than appreciative, and will accept my doctorate with appropriate enthusiasm and humility!
Now the reason  I’ve been saying all this is because actually in point of fact I really do passionately believe in education. And if I could  go back to live my early years over again, then I’d love to have taken a degree in anthropology, philosophy, or psychology. And the great thing is that, if I ever decide to pursue any of these studies, then I’d be able to do so. That is what I love about the Open University. It creates  the opportunity to learn at any stage in adult life. The Open University  creates a "yes you can"! approach to learning, which I think is  the basic premise to life transformation.
When the combination of positive thinking and the opportunity to learn is combined with application then lives can be completely  transformed. Which finally leads me onto another one of my passions and gives me the chance to acknowledge the importance of bringing the Open University to developing countries. In most parts of Africa for example, there is a desperate shortage of trained health care staff, as well as  trained teachers, or people with technical skills to help them access meaningful employment.
Women and girls are especially impacted, as I’m sure you are all aware. The chance to have an education is the way out of poverty, and the way forwards. I just want to end by saying how encouraged and appreciative I feel by knowing that you are making a massive contribution to people’s lives, who would otherwise be trapped by circumstance. And to say thank you so much for everything you do, and for giving outsiders like me such a wonderful piece of recognition."