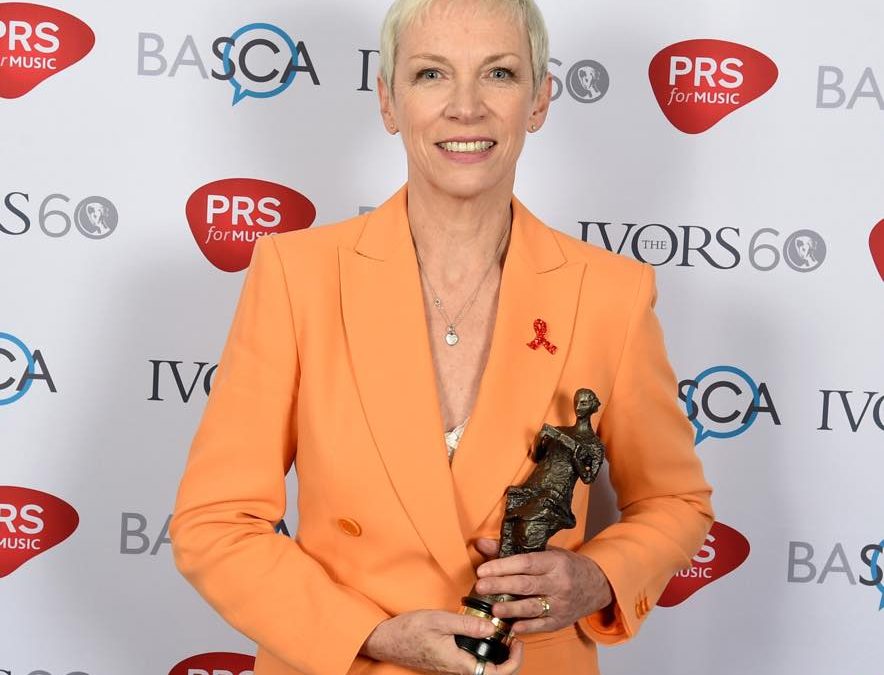 We are delighted to announce that Annie Lennox was today presented the BASCA Fellowship at the 60th Ivor Novello Awards.
The BASCA Fellowship is the highest honour the Academy can bestow. You can read an excerpt from Annie’s acceptance speech below.

For more details about the Awards visit: http://theivors.com/the-ivors-2015-winners

I first got the idea that I wanted to be a singer songwriter many moons ago around 1973, when I was 5 years old… ( just kidding!)I was actually a little bit older than that.
At that time there were only two female role models that I knew of who wrote and recorded their own songs – The great Carole King and Joni Mitchell.
I became obsessed with the idea of writing, performing and recording songs, but didn’t really have a clue as to how to go about it, apart from the writing and singing bit.
When I first met Dave ( Stewart ) I was working as a waitress to support myself and writing songs on an old Victorian harmonium in a tiny bedsit room in Camden Town.
That was the point I decided to stop waitressing for good.. and I haven’t really looked back since.
Dave and I formed a band with a prolific song writer called Peet Coombes and at that time I stopped writing because Peet would come up with a batch of brand new songs on a daily basis, so there really wasn’t much point in competing with his prodigious output.
It wasn’t until The Tourists disbanded and Dave and I formed Eurythmics that I really got back into writing again at the end of the Seventies.
If it wasn’t for Dave and our shared passion for music making, then I don’t know whether I’d be standing here at the 60th BASCA Anniversary, so I have to dedicate a massive chunk of this incredible award to him. I think the combined sum of both our parts was actually greater that our two individual selves at that time…
Towards the end of the Eighties, we both went our separate ways and I started to to wonder what it might be like to try to do something on my own.
That was when I met Steve Lipson, who listened to my rough demos and decided to take a chance on producing my first solo album,cryptically entitled “Diva”.
I don’t know what I would have done with my life if I hadn’t become a singer songwriter. Creating music was all I really wanted to do and I feel incredibly privileged to have been able to pursue my dreams…