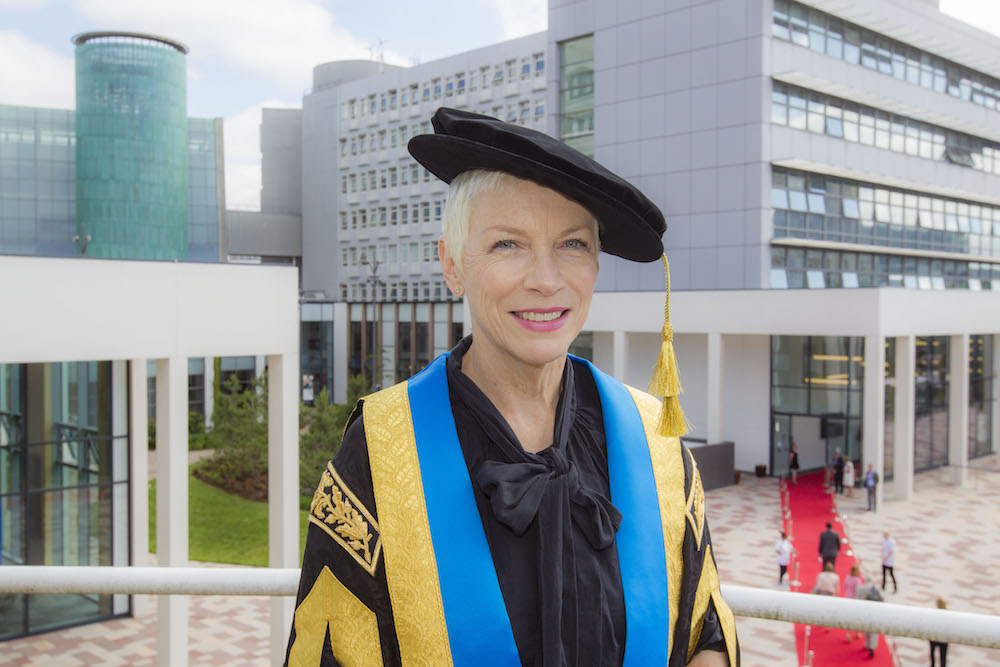 Chancellor Lennox pledged to use her ceremonial leadership role to further the University’s mission to promote the common good, during a special ceremony today (July 2) at the University’s Glasgow campus.

Chancellor Lennox said: “I am humbled and awed beyond measure. I only wish my parents, grandparents and great grandparents could be here today to witness this special occasion, as it would have filled them with pride and disbelief, proving in some way that miracles can sometimes happen. After all it’s with thanks to them that I am here in the first place.

Dr Lennox said she has no degree herself but could be described as “an honorary graduate from the school of life”.

She added: “I come from a long line of hard working Scots from the times when class boundaries, economic identities and gender roles were very firmly established. Young women from working class backgrounds gaining university degrees were as rare as kangaroos in the Antarctic.”

“Our values-led mission is to collaborate with others to deliver excellent education and research which transforms the lives of the individuals and communities we serve to create lasting social benefit.

The students, staff and lay governors of the University share a common sense of purpose, to work together for the Common Good.  We are deeply honoured to welcome our inspirational new Chancellor to our University.”

Over 20,000 students from more than 100 countries study at Glasgow Caledonian University on its campuses in Glasgow, London and New York as well as at partner organisations in South Africa, Mauritius, Oman and Bangladesh.

The Chancellor received an OBE from the Queen in the New Year’s Honours list in 2011 for her humanitarian work recognising her contribution in raising awareness of the HIV Aids pandemic as it affects Women and children.

Named as one of the 100 Greatest Singers of All Time by Rolling Stone Magazine, Annie Lennox’s musical career spans over four decades. Best known as part of the duo ‘Eurythmics’ with partner Dave Stewart, she has also enjoyed a stellar solo career. Selling over 83 million albums worldwide, she has been awarded numerous musical accolades, including: 8 BRIT Awards (including a Lifetime Achievement), 4 Ivor Novello Awards, 3 MTV Awards, 4 Grammy Awards and 10 Grammy nominations, 26 ASCAP Awards – a Golden Globe and an Academy Award. She is the first female to receive a British Academy of Songwriters Fellowship.

In 1986 she became an associate of The Royal Academy of Music, which was then followed by a Fellowship in 1997, and an Honorary Doctorate in 2017. She has been recognized with doctorates and fellowships from The Royal Scottish Academy of Music and Drama, Edinburgh College of Art, the Open University of Scotland, Williams College USA, Essex University, Berklee College of Music USA, and in 2016 she received a Lifetime Achievement Award from The Musician’s Company.

A specially commissioned poem to commemorate the Installation was read at the ceremony by Professor Jackie Kay MBE FRSE, Scotland’s official poet – our ‘Makar’ – who is also an Honorary Graduate of the University. The Makar’s verse (attached) draws inspiration from the Chancellor’s childhood in Aberdeen, her ‘rock star’ status and emergence as one of the world’s most distinctive and compelling voices on equality and human rights. In an extract Dr Kay said:

“In this University for the Common Good,

Robed and dressed for the part, singing,

Your tender heart, the dreams of your girl self

Will run to greet you, up the tenement steps,

A skip and a jump into the future.

A life of full circles. Sing, my sister, sing.”

During the ceremony, the Chancellor was officially installed in her new role by Rob Woodward, Chair of Court, the University’s governing body. Almost 300 of the University’s Honorary Graduates and supporters attended the event, including representatives from the arts, politics, business and entertainment.

The role involves formal and ceremonial duties as well as the support and promotion of the University’s ambitions and vision for the common good.  The Chancellor’s first official duty will be to confer degrees to students on the first day of the University’s summer graduation tomorrow (Tuesday July 3rd)

The University’s heritage dates back to 1875 through its founding institutions. It received University status in 1993.