An excerpt from the The Guardian 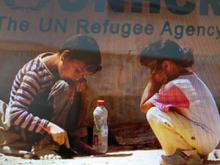 An excerpt from the The Guardian newspaper regarding the abominable massacre in Syria…it’s an atrocious debacle, whichever way you look at it, or "side" you happen to take.

Britain has said it believes forces loyal to Syrian president Bashar al-Assad were responsible for a chemical weapons attacks in the rebel-held suburbs of Damascus, saying the Syrian government had "something to hide"."I know that some people in the world would like to say that this is some kind of conspiracy brought about by the opposition in Syria," said the foreign secretary, William Hague, on Friday. "I think the chances of that are vanishingly small and so we do believe that this is a chemical attack by the Assad regime."Syria’s government has offered no public response to United Nations calls for its team to inspect the site of the attack, in which opponents of Assad said from 500 to more than 1,000 people died.Barack Obama called the apparent gassing of hundreds of Syrian civilians a "big event of grave concern" in an interview with CNN on Friday but said he would not rush to embroil Americans in a costly new war. He brushed over an interviewer’s reminder that he once called the use of chemical weapons a "red line" for US action on Syria.Washington is split over how to respond to the latest attack. Military leaders such as John Dempsey, the chairman of the joint chiefs of staff, have urged caution for fear of becoming further embroiled in a Middle East conflict when it is unclear whether the rebels would back US interests. Moscow on Friday joined calls for an independent investigation by UN experts. The Russian statement said Sergey Lavrov, the foreign minister, and the US secretary of state, John Kerry, discussed the situation by telephone on Thursday and concluded that they had a "mutual interest" in calling for the UN investigation.The statement said Russia had called for Assad’s embattled government to co-operate with an investigation, but questions remained about the willingness of the opposition, "which must secure safe access of the mission to the location of the incident".Russia has been one of Assad’s key allies in the international arena. Moscow has asserted that the attack was "a homemade rocket loaded with an unidentified chemical agent" and was probably a provocation by opposition forces intended to implicate the Syrian president. Earlier, the UN secretary general, Ban Ki-moon, renewed his call for Syria to allow UN inspectors immediate access to the site of the alleged attack.