Actually I don’t consider myself to be a particularly 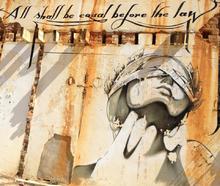 Actually I don’t consider myself to be a particularly "strong woman"… For every whiff of smoke blown up my proverbial derriere, there’s always a little diabolo ready to pitch a dollop of sod in my direction to bring me instantaneously back down to earth with a bang. That’s not what "keeps me grounded"….it just keeps me on my toes. I’m as flawed and complex as anybody else…but I’m wired in a way that makes it almost impossible to ignore certain things…especially when it comes to injustice and basic human rights. To me, that’s not rocket science. If you don’t have a certain capacity for empathy, then something has been compromised or diminished in your soul.
We cease to question. We accept.We acquiesce. We believe that we are powerless to do anything to change the status quo, and we fall silent.
We reduce and resign ourselves to becoming the inhabitants of small boxes, and become defined by our containers, our labels, our limited points of view.
We get used to things being just as they are, when they’re defined as "normal," or part of a culture.
Slavery was considered "normal". Apartheid was considered "normal"( for some)… Child labour is normal in many parts of the world. in many places, child marriages are"normal" too. . It’s all relative.
But endemic abuse of women and children across the board has to be a sign of extreme dysfunction in any given human society.
What continues to amaze me is that individuals with access to political and economic power and influence, consistently seem to create the bottle necks to positive/ social/ transformative change, when they could just as easily be the facilitators.
Why does it always seem that "good guys" are so rare and exceptional..when everything else around is saturated in corruption, nepotism and self interest.