A woman needs a man like a fish needs a bicycle" 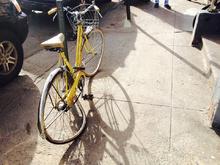 I remember when I first read the phrase " A woman needs a man like a fish needs a bicycle"… written in biro on one of the toilet walls of Aberdeen University’s Student Union back in the early Seventies. I couldn’t quite get my head around it at the time, but years later the penny fell and I got the joke. Here’s a bicycle I encountered the other day that doesn’t need a fish.. It needs.. a new wheel ’cause it ain’t goin’ anywhere in a hurry!! Hilarious.. and a trifle poignant at the same time. I thought you might appreciate it’s ambiguity.