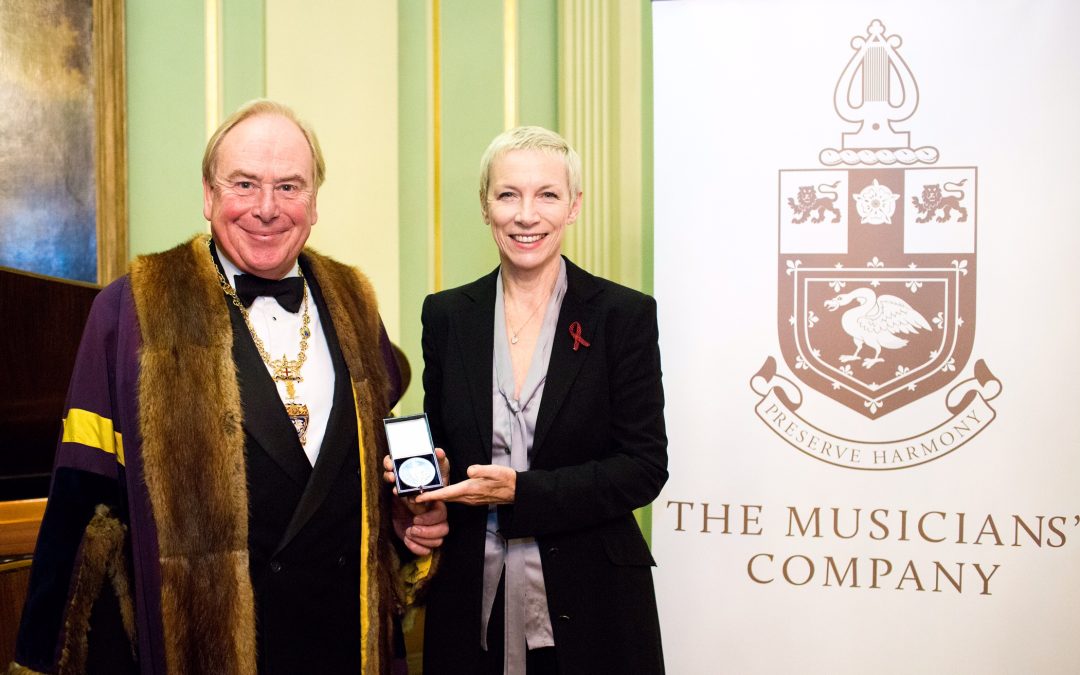 In 2016, The Musicians Company inaugurated new awards in Popular Music, to support young promising talent at the BRIT School and the Academy of Contemporary Music (ACM), the Company also awarded its first award for Music Direction in Musical Theatre.
Each year the Musicians’ Company, one of the oldest and most respected charitable companies in the City of London, donates over £180,000 in scholarships and awards in support of young musicians at the start of their careers across all musical disciplines.

Associated with its widespread support for young musicians across all musical genres, the Musicians’ Company has a long tradition of recognising creative talent and the contribution that distinguished artists have made to the music profession from Elgar and
Vaughan Williams to John Dankworth and Ronnie Scott. The Company has now added a Lifetime Achievement award in Popular Music and the Company is delighted that global music icon Annie Lennox was the first recipient of this award during a ceremony that took place on Wednesday 19th October.

Annie Lennox says, “Like so many aspiring musicians, I came to London as a young person in search of an opportunity to realise my passion for music making.
It took some time, effort and blood sweat and tears before I became a fully fledged, self supporting singer songwriter, performer and recording artist, but almost miraculously, that particular dream actually did come true in more ways than I could ever have envisaged. It is therefore especially meaningful to be awarded the Popular Music Lifetime Achievement by The Musician’s Company, whose illustrious past goes back for hundreds of years.
As both a Scot and a Londoner, I feel incredibly honoured, proud and amazed to be inducted into this long lineage of tradition and musical history.”

For over 500 years the Worshipful Company of Musicians has supported the music profession in all its forms.

Every year the Company gives a range of awards, scholarships and medals, which make a real difference to the lives of outstanding young singers, composers and instrumentalists as they make the transition from study to a professional career in music.

The John Christie Award is the Company’s oldest award with a distinguished list of past winners. Other awards range from Classical Music to Jazz, Music Theatre, Popular Music, Brass Bands and the Military Schools of Music.

In addition to their specific award, our winners are invited to become Yeomen for the next five years. This entitles them to be considered for a range of performance opportunities, which the Company arranges – probably their top priority as they seek to become known. This year our Yeomen will give over 100 performances at venues ranging from the Wigmore Hall, where the Company organises its own concerts every year, to major music festivals across the country.

Our Yeomen also take part in an extensive Outreach Programme, taking music into primary schools mainly in the more deprived inner London boroughs that have little or no music provision. In 2015, 40 of our award winners made 132 visits to 55 schools, reaching 6,432 children, a total which will be surpassed in 2016.